Rise of Inflation in the United States

﻿If you were an economist and asked to name the word of the year 2021, it would probably be “Inflation”. Inflation has seen a rise across almost all the major developed and developing economies of the world. But why is this the case?. In this article we will look at the factors contributing to the rise of inflation in USA

The USA recorded a 6.8 percent Year on Year increase in its CPI (Consumer Price Index) numbers in November which is the largest increase since June 1982. The fears that inflation could rise in the country were present from the start of the year when Joe Biden’s $1.9 Trillion stimulus plan was signed. The Federal Reserve initially said that the inflation would be transitory and had affirmed the target of keeping inflation at around about 2 percent. However, as the year went by the inflation numbers kept on increasing (see graph below) 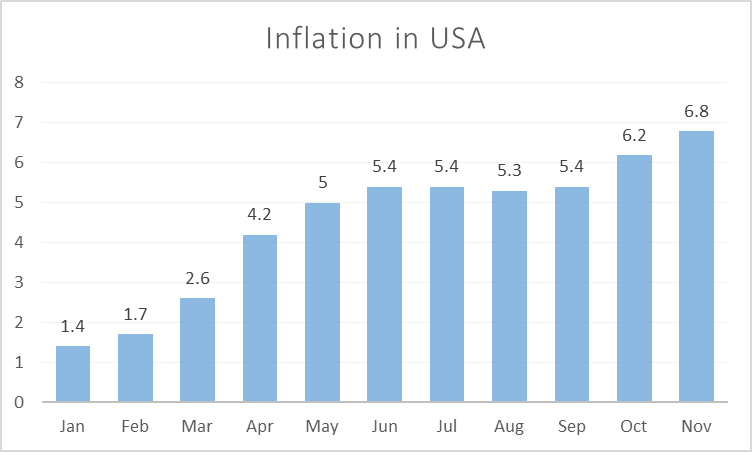 Economists give many reasons for this rise in inflation in the United States but the three primary ones (which are interconnected) seem to be Supply Chain issues, Rise in Demand for Certain goods and Labor Shortages. These seem to be aided by the additional government spending and the low interest rates present in the country.

The United States does the bulk of its imports from China (~ 20%), a country which has seen power shortages hamper its production recently. In addition, the country has a shortage of truckers and is facing backlogs of shipping containers on its major ports.

Rise in Demand for Certain Goods

During the pandemic, there were fears that demand would be less as people would spend only on essential items. But with the onset of vaccines, easing of restrictions and high amount of savings there has been a resurgence in the demands of goods, especially for equipment using electronic chips.

The demand surge directly ties in with the Supply Chain Issue as production in the United States was not able to match the demand, there was an increase in imports and given that production facilities in China and other parts of the world were not running at full capacity, there was an increase in the price of goods as well as shipping costs (due to a shortage of shipping containers). This led to bulk orders by many of the sellers in the United States which exacerbated the backlogs that the country got to see at many of its shipping ports, causing even more shortages and rise in the price of goods.

The United States has 4 million workers less than what it had pre-pandemic. This shortage is not demand driven but supply driven meaning that many Americans are opting to stay out of the workforce for reasons ranging from Covid to increased responsibilities and generous savings. Labor Shortages increase inflation in two ways. The first one being that as less people will be willing to enter the workforce, employers will have to increase wages to attract talent. This would lead to an increase in labor costs throughout the supply chain due to which manufacturers/service providers would have to increase the price of goods/services. The second reason is that a rise in wages would correspond to more consumer spending.

Besides the above factors which are more structural in nature, this one is more of a behavioral one. The point is that the longer we see the inflation numbers being up, the more normal it will become for us to expect inflation. This leads to a cycle in which companies would increase prices and workers would continue to demand higher wages. A situation like this is tricky to manage because the Federal Reserve may have to raise interest rates even more than what is required, leading to a higher cost of borrowing and a stifling of economic growth that may have its reverberations across the world.